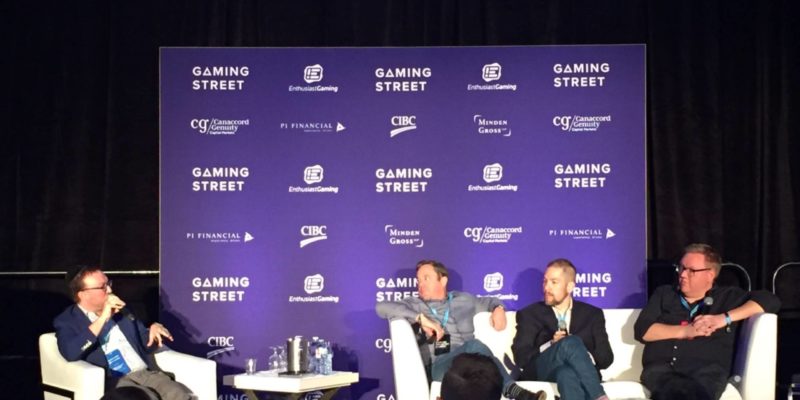 Before the doors of EGLX 2019 officially opened to the public, an investor-friendly event was underway on the Friday morning. Expert panels covered various topics on penetrating the video game community, including a discussion called “Reaching the Gamer Demographic.”

Moderated by Enthusiast Gaming president Menashe Kestenbaum, the conversation fluctuated from breaking down what the gaming audience really looks like to how those consumers want to be communicated with.

On the panel was Bryan Segal, senior vice president of Comscore, Adam Boyes, CEO of Iron Galaxy Studios (and former VP at PlayStation), and Adrian Montgomery, CEO of Enthusiast Gaming.

In a discussion about defining and categorizing the gaming audience, Montgomery described his transition into working in the gaming industry, which started with one of the biggest esports tournaments on the scene — Dota 2’s The International. The event was hosted at the Rogers Arena in Vancouver, which was under Montgomery at the time; it was then he realized the sheer size of the community.

“When they told me [the prize pool] was about $30 million, that changed everything for me. When you see it up close, when you see these gaming tournaments, as an example, it changes your perspective. And you realize just how passionate, how engaged and just how much of a not-fad this world is.”

Echoing a similar sentiment was Segal, who likened the growth of the gaming and esports industry to Facebook.

“At the beginning, advertisers didn’t really understand it, people didn’t want to get involved … and then over time, it exploded,” he said.

As the community continues to grow and more brands and companies invest into it, Segal pointed out that advertising in this space needs to be organic for it to be effective.

“I think sometimes there isn’t that choice and you feel you have to pay to play, but if you can get [advertising] in this organic way, I think that’s going to drive it more [successfully],” he said. “They don’t want fake advertising, they don’t want fake sponsorships, they want real-life brands that fit properly into the games that they’re playing, and I think that’s going to be really important.”

What’s the right way to engage with gamers?

The trend of authenticity continued as Kestenbaum shifted the discussion to the panel’s final question: how do consumers want to be engaged with? He specifically highlighted the way that things have shifted in 30 years, and asked panelists how brands, organizations and teams can effectively conduct business with their fans.

“Back in the ’80s and ’90s, to me, it was like you’d go into a dark dungeon, put a quarter on a screen and you’re going to play against a random stranger on an arcade game. Nowadays, where people are socially organizing to play together, and I think authenticity is the absolute key,” Boyes responded.

He went on to describe recommendation engines on platforms as one of the “biggest tragedies of modern day gaming.” Boyes explained the way channels like YouTube and TikTok engines are able to analyze and suggest the type of content a user enjoys. However, he also added that platforms like Facebook and Google have gone too far in the other direction with using tools to predict what their consumers are thinking.

According to Boyes, if gaming companies can find a middle ground to integrate people’s social circles with recommendations, it would further content discoverability and pave the way for rewarding creators.

“Forcing people to only have to buy a game to support a creator, I think, is the wrong way to go about it; the more tools we can create and the more awareness we can get through discoverability is super critical to talking as gamers, but it’s all going to be authentic.”

Being real is essential

The other panelists chimed in with similar opinions about creating genuine content and products for consumers, explaining that simply “slapping a logo” onto something isn’t enough anymore. As they discussed the need for brands to create unique experiences that consumers can get behind, Boyes ended the panel with an anecdote from his PlayStation days.

“We’d been announcing a lot of partnerships and new games and revealing them for the first time, and the publisher would always give us the copy of what exactly they’d want the script to say.”

Boyes then described the back-and-forth that would ensue between PlayStation and the publishers as they attempted to rewrite the scripts to include jokes and other, more personable material. With the publishers frequently not approving their work, they created a fictitious script editor who “somehow” missed all the publisher changes to on-stage scripts.

“What got across was that authentic message that was so important, and how we crafted that. Gamers have the best smell and the best senses on the planet, they can turn their back on something instantly overnight, and I think that’s something to also be careful of, the cancel culture aspect of it, because if you’re inauthentic they’ll catch it right away,” he said.

“That authenticity is absolutely key, we’ve seen that inauthenticity steal away things in the past, so I think authentic conversation is [the] most important takeaway about how to discuss topics with gamers.”

Note: Enthusiast Gaming, which hosts EGLX, is the parent company of Gaming Street.