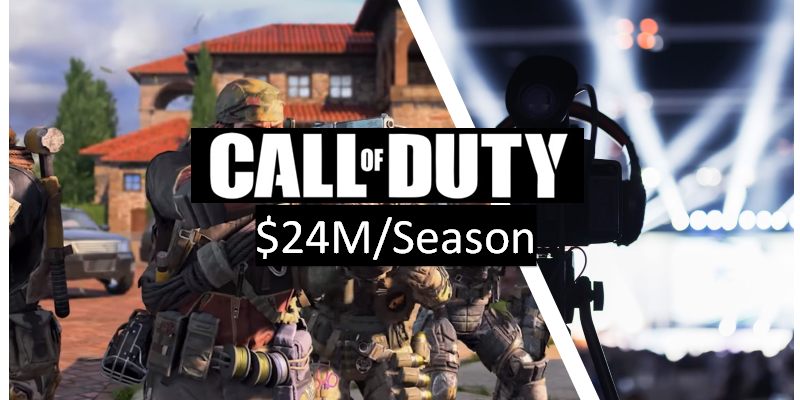 I recently published a piece at Konvoy Ventures projecting the value for the upcoming Call of Duty League (CDL) at $24M/season. The CDL is currently selling franchise spots to various investment groups for $25M each. Just as we saw with the $90M Twitch deal for the Overwatch League (OWL), there will certainly be a deal for Call of Duty League media rights. Using the OWL deal as a benchmark, we back into a price for the CDL. We also did the same process for League of Legends Championship Series (LCS) and found that it should be priced at $160M per season.

If you look at the average # of viewers for the latest championship for each sport and then include OWL, you get a value per viewer. While this is not entirely reflective of the underlying value in each league, this is one way to compare “apples to apples” across various competitive leagues. Interestingly, the value for OWL and MLB is identical at $52/viewer:

How Call of Duty League stacks up

As our research shows, you can use the price per channel, hours watched, and average viewer to back into a price for the media rights of the CDL and LCS. Depending on which metric you look at, the pricing for the LCS and CDL varies. I believe that the hours watched and average viewer metrics are the most pertinent for a media rights deal. The below is a summary comparing the OWL, LCS, and CDL:

I believe that the upcoming contract for the Call of Duty League media rights should be priced at $24M per season. In theory, media rights revenue is split evenly among franchise teams. With nine franchises announced for the CDL, I expect at least three more, taking the total to twelve spots. Our estimates indicate that each team would receive a max of $2M a season ($24M/12 teams). This assumes that Activision Blizzard takes nothing from media rights, which is unlikely. In reality, the franchise teams will probably receive quite a bit less.

There are definitely other costs and revenues associated with being part of this league. But if we were to assume all teams are breaking even on the CDL before they receive 100% of media rights revenue ($2M/season; again, unlikely), it would take 12.5 seasons to make back their franchise fee of $25M. Most investors don’t buy franchise teams for cash flow but the appreciation of the asset over time. That said, unlike traditional sports that last for 100+ years, video games come and go. I firmly believe an investment strategy should reflect this different reality in video gaming.