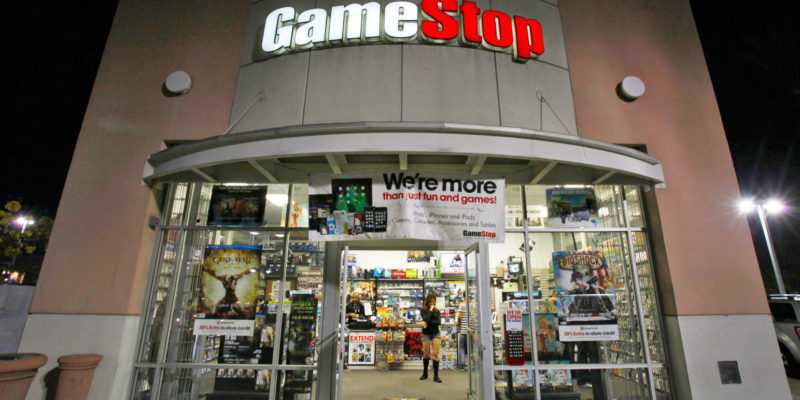 Video game retail chain GameStop (NYSE: GME) has long been on the endangered species list, with its shares trading at an all-time low of $3.60 a share on Friday, down from the previous low of $3.72 the day before. Both are part of an ongoing decline as the company continues to struggle. But there is hope for the company, which is still the largest video game retailer in existence with over 5,000 stores worldwide.

In short, GameStop is facing the same existential threat from the internet that major sellers such as Tower Records and Blockbuster Video faced before they eventually shut down. Specifically, consumers are increasingly turning to digital storefronts such as Xbox Live, PlayStation Network, and the Nintendo Game Store instead of purchasing physical discs. In fact, gamers can play all the latest games, in addition to a huge library of classic ones, without ever touching a disc or cartridge for the rest of their lives.

Although both Microsoft and Sony stated that their next consoles will have physical disc slots, it does little to mitigate the fact that physical stores are quickly going the way of the dinosaurs as the current console cycle winds down. This is especially the case when you consider how there are digital store exclusives that never make it to disc.

Even its pre-owned games program, which lets customers buy pre-owned titles at a discount – once the most stable and attractive part of GameStop’s business – is in decline.

“Our pre-owned business decreased 20.3% for the quarter,” said former GameStop CFO Robert Lloyd said on an investor call in June. “We continue to see declines in pre-owned software, reflecting the softer demand for new physical games and the increasing popularity of the various digitally offered products.”

The decline is partly due to a circular effect. If fewer people are purchasing new games on disc, then there are fewer discs being traded in and resold. On top of that, consumers are increasingly embracing the convenience of having their games delivered to them via the internet. They’re becoming increasingly uninterested in driving to and from a store to purchase a game then having to wait for online updates to install anyway. It’s far easier to simply purchase a game and download the everything at once.

George Sherman, who was appointed as GameStop’s CEO in April, laid out a three-point plan to turn the struggling retailer’s fortunes around during the June investors call.

Business Insider delved into the three points, with the first task involving lowering non-production costs such as salaries. This includes laying off regional employees and reorganizing how stores report to the head office.

Although Sherman is rather vague about what “optimizing” the business means, it likely addresses the used games business. Meaning, in order to become more competitive with online stores, GameStop will probably sell pre-owned games for even lower prices. However, it is unclear how this approach will deal with the fact that fewer people are purchasing new games on disc.

Developing new revenue streams is the vaguest component to the plan. Sherman explained that GameStop is testing new store concepts that focus on elements such as gaming, new and pre-owned games, interactive experiences, pop culture, and collectibles.

It’s likely that ThinkGeek, which GameStop acquired for $140 million in 2015, will play a major role in this endeavor. The brand sells gaming and collectibles, clothes, toys, and other products that celebrate “geek culture.”

GameStop officially shut down the ThinkGeek site in June as part of its “business transformation initiative” and migrated its operations to the parent company’s website. Its products are also sold at GameStop retail stores.

Given its current state, it’s difficult to tell how likely future acquisitions will be as the company continues to transform itself. GameStop has made multiple efforts to diversify its offerings, usually without much success.

It acquired video game publisher Kongregate in 2010 then sold it to Modern Times Group (MTG) in 2017. The company also bought Spring Mobile in 2013, making it the core of its Technology Brands Group. The mobile division was sold to Prime Communications for $700 million in January.

GameStop has also tried to take a more head-on approach to dealing with digital purchasing. It acquired the digital PC games platform Impulse (rebranded as GameStop PC Downloads) from developer Stardock in 2011 and subsequently discontinued the service in 2014. The company also launched a digital publishing division called GameTrust Games in 2016. It worked with some prominent developers and released a handful of low-cost games, but hasn’t produced anything new since 2017.

Investors will have to wait and see how GameStop’s current plan to transform itself will differ from previous efforts. It remains to be seen whether it will be enough to pull itself up from its downward trend.