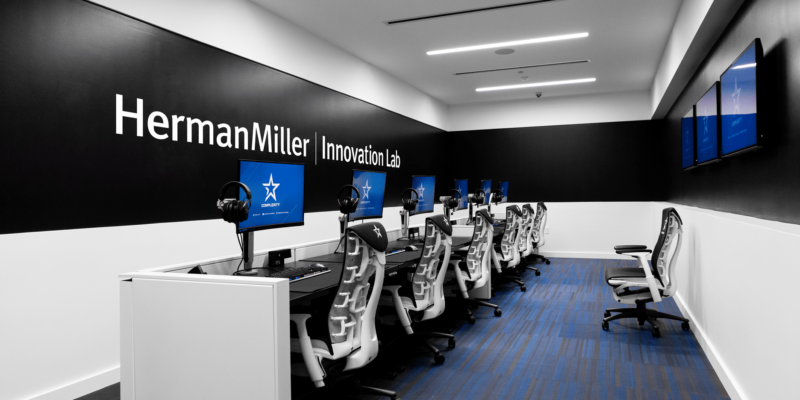 “Herman Miller is globally recognized for ergonomics and design innovation, and is a perfect partner to develop new advantages for our players,” said Jason Lake, Founder and CEO of Complexity Gaming, in a release. “Through this unprecedented partnership, we will research and develop findings that educate gamers, increase wellness, improve player performance, extend professional careers, and increase the overall quality of life for not only Complexity players but gamers around the world.”

By utilizing real-time player data from the in-house innovation lab, Complexity Gaming and Herman Miller will work together to understand gamers’ needs. In addition, the two will try to develop a solution to ergonomic equipment and design products which address these needs. The esports facility is now also equipped with Herman Miller desks and Embody chairs.

“At Herman Miller we have a robust history of ergonomic research and human-centered design, which we’re excited to apply to the esports community. As our first foray into esports, we are applying our research capabilities in the Herman Miller Innovation Lab to study alongside some of the best players and trainers in the industry to understand how our designs can address the points of struggle,” said Diane Turnwall, VP of Global Seating at Herman Miller. “The partnership is not only mutually beneficial to our respective companies but also casts wide-bearing advantages for gamers around the world.”

With the top three injuries in esports being wrist, elbow, and back pain due to mostly bad posture and frequent usage, Herman Miller will also apply their ergonomics research to Complexity players. It will leverage the partnership for an ongoing research study to educate the industry and maximize player potential. The two will also collaborate on the publishing of a variety of content on gaming practices and injury prevention.

Complexity Gaming, owned by NFL team Dallas Cowboys owner Jerry Jones and real estate investor John Goff, is currently partnered with brands like MillerCoors’ Bud Light brand, HyperX, MSI, the United States Army, and more. The organization also opened up its own esports facility and headquarters with the Gamestop Performance Center in May.