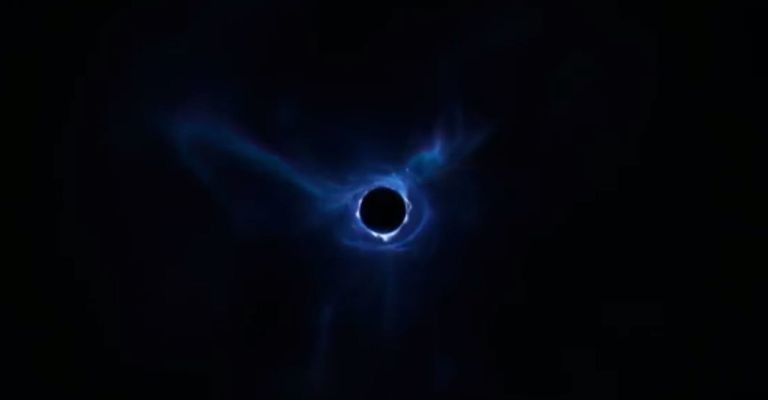 Andreesen Horowitz is arguably Silicon Valley’s most prolific tech VC firm, and of course they have a soft spot for the world of gaming. They put out what I thought was an interesting, brief thought piece on how they see the world of gaming evolving. I recommend diving in here.

At the end of the day, they believe the next generation of games will grow faster and larger than today’s hits, fueled by network effects from platform convergence, organic social discovery, and user-generated content. In other words, Fortnite is really just the beginning. Not to mention we are just beginning to scratch the surface of what transformational tech like cloud streaming, 5G, and immersive reality will do to the space.

Here are the highlights:

A few other pieces of news…

Our hopes and expectations
Black holes and revelations
– Starlight, Muse

On Sunday, Oct 13, 2019, at ~2:00 p.m. ET, you may have felt a great disturbance in the gaming world. That disturbance was the collective cry from millions of voices (~250M to be more exact) as Fortnite, the western world’s battle royale darling, concluded its tenth season with something of a surprise. In a move that would even have the Game of Thrones directors reeling, Epic Games obliterated their entire game ecosystem in a cataclysmic in-game disaster of, well, epic proportions. What was left in its place was a black hole, and as of the afternoon of Oct 14, if you tried logging into North America’s arguably most popular game, all you saw was a black hole. 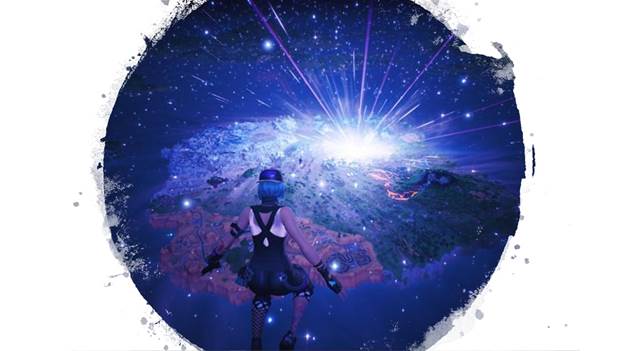 Reminiscent of the intro in the Star Trek reboot: Video game history is made with a super-massive black hole

This isn’t exactly the normal course of business for a big update in a game. Typically, such an update means a mundane server downtime, where the game goes offline with little fanfare while developers work on piecing together and shipping their new content. However, Epic Games has set a new precedent in the world of full-fledged game update pushes. It’s not their first rodeo either. In Season 4, they had a meteor shower reshape the island, and to celebrate the new year in 2019 they ushered it in with a giant disco ball that descended from the sky.

The way that Epic executed was both art and science. They telegraphed to the world that the conclusion to Season 10 was going to be big by having a character in the game called ‘the visitor.’ The visitor throughout season 10 was constructing a massive rocket in the map, which naturally caused players to wonder what would happen when the rocket launched. Then, at 2:00 pm on Oct 13, the rocket launched, causing a chain reaction of events that would ultimately culminate with a giant black hole. The cultural phenomenon it created is now colloquially known as ‘The End’.

When you logged into the game during this ‘down time’ event after The End, all you saw was a black hole. That wasn’t all, though – Epic also hid an Easter egg. They buried a mini-game of space invaders if you entered the Konami code (up, up, down, down, left, right, left, right, B, A, Start). Not only that, strange numbers would materialize and then disappear in the black hole. People who put the numbers into Google Maps were trolled by the game creators by directing them to an image that referenced the crab rave meme. 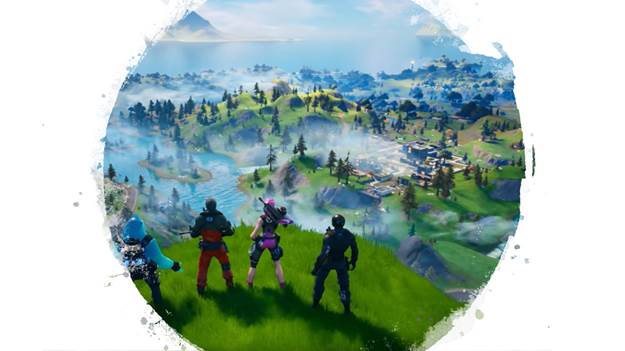 Fortnite Chapter 2 – you can watch the trailer here

On Oct 15, Fortnite returned with their second chapter. Not only that, Chapter 2 provided a litany of updates including revamped gameplay, a new map, updates skins, new locations, the ability to swim, new weapons, and new game modes.

Ladies and gentlemen, Fortnite seemed to be dying and in need of a transfusion of new content. Or so it appeared. Let me explain…

To understand what was going on under the hood of Fortnite, let’s take a quick look using Streamhatchet to find the total views for the game. Now, it’s very hard to measure the total concurrent player trends for Fortnite, but what we can interpret is the total viewership trends on Twitch for this game. This can serve as somewhat of a proxy. Assuming all things are equal, more people watching Fortnite should translate into more people playing Fortnite, and vice versa. The following data shows the viewership trends on Twitch for Fortnite year-to-date. 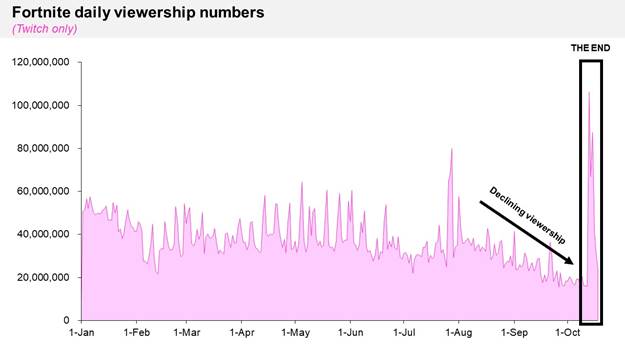 On Oct 13, when Epic Games unleashed the black hole on the world of Fortnite, ~106M people watched Twitch, which was more than the entire previous week of viewership combined. This is also the single largest viewership number for Fortnite on Twitch, period, in history. If we look at the months leading up to this event, for the first time we saw steady declines in Twitch viewership, suggesting that the game was starting to wane. Epic Games simply needed to shake it up, and boy oh boy, did they ever.

We’ve talked many times about thinking of gaming like content (even though it’s bigger than the movie business and the music business combined). If we look at an analog for most wide-release games, like GTA 5 for example, you can think of them like big movie franchises. Years of development are spent on producing a new game, which is produced, distributed, and sold. It’s much like feature films. This was the video game production business for quite some time.

Free-to-play changed this. All of a sudden, you couldn’t rely on the gaming business’ equivalent of ‘ticket sales’ and ‘dvd sales’. You had to rely on keeping people in the game ecosystem you created for years after you released the game so you could monetize them inside the game, with digital goods, advertisements, and a range of other ways. You needed to keep people engaged.

I think of this like the gaming business’ equivalent of TV Shows. That’s what Fortnite is. Like big TV show productions like Game of Thrones, the name of the game is to keep people engaged. Fortnite has borrowed the TV show formula of throwing a grenade in the cast or the world in the show to keep people engaged. Long term series like Grey’s Anatomy know all too well of this formula, and it works.

While the internet exploded and showed the cultural power that a single game can have, I looked at it somewhat differently. It was just another sign of the formulas from traditional content streams making their way into the gaming business, and another all too auspicious sign that the future of content really is in the game.

In December they brought on Keyvan Peymani as their Executive Chairman (the former head of startup marketing for Amazon Web Services and a former VP ant Warner Bros and Disney) as they began to scale their platform to new games. They allow players to win real-life rewards while playing in-game and can be integrated into any Unity-based game.