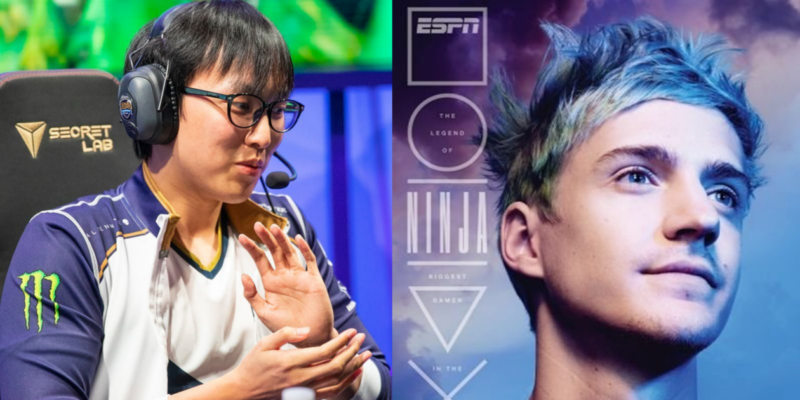 In video gaming, a professional gamer falls into two categories:

An esports athlete plays at the highest competitive level for professional teams like FazeClan, Team Liquid, or Cloud9. A professional entertainer includes those who have become prolific streamers such as Ninja, Myth, or Tfue.

In traditional sports, you see this mimicked in the difference between top athletes (Christiano Ronaldo, Lebron James, Neymar) and entertainers who make a career out of a sports-based content (DudePerfect, Cris Smoove, Professorlive). However, with the rise of social media, professional athletes have ended up blending their careers as top-performing competitors with their media and entertainment presence. In gaming, this is already the status quo.

What is unique to gaming and esports is that the entertainers and streamers are more well-known than the esports athletes.

In my opinion, this comes down to two main reasons:

1. Financially, it currently makes more sense to be an entertainer or content creator in gaming than it does to be a professional esports athlete. (see ESPN’s article on Ninja)

2. Most esports athletes, while considered elite gamers, are typically more focused on their elite gameplay vs their charisma in front of their fans. This is changing slowly, but it’s not the status quo yet.

Watching the distinction between athlete/entertainer is most notably seen through the prolific streamer, Ninja, who started out as a professional esports athlete and pivoted his career into being a full-time Twitch streamer (entertainer). He is still affiliated with Luminosity Gaming from his Halo days but does not compete on the professional scene as he once did. He has also been affiliated with Evil Geniuses, Renegades, Cloud9, and Team Liquid.

Ninja competed in 50 events between 2009–2017 (earned $190k) but since his last competition at DreamHack Atlanta in 2017 has directed all of his focus towards being one of the most well-known streamers across the globe and earning $10M in 2018 alone. While he has competed in Fortnite tournaments, these are different from your typical esports tournaments, which brings me to my next point.

It is common knowledge within the gaming ecosystem that Fortnite tournaments aren’t actually showcasing the best talent, but instead the best entertainers. Fortnite is the clearest example of taking advantage of the differences between esports competitors and entertainers.

Epic Games (owners of Fortnite) consistently host and sponsor tournaments that are geared towards the entertainer because their goal is to bring as many eyes to watch their competitions, instead of determining who are the best players in Fortnite.

In one of the first major Fortnite tournaments (the Fortnite Pro-Am) in 2018, “50 celebrities and 50 professional video game players gathered near the north end of a soccer stadium in Los Angeles to play Fortnite for $3 million in prize money.”

In this case, “celebrities” included the likes of OKC Thunder star Paul George and rapper Vince Staples. While $3M is certainly a sizeable prize pool, the purpose of this tournament was for entertainment (fun to watch), not for competition (determining who is the best). This is partly why we wrote a piece on “Why Fortnite Won’t Die.”

Both professional esports athletes and the popular entertainers in gaming benefit from having their own agents. For the esports athletes, they sign multi-year contracts with teams and, given their relatively short careers, these contracts significantly dictate how much they will earn throughout their gaming career. A bad contract can be the difference in 10s (or even 100s) of thousands of dollars in career earnings when the average salary for a professional esports athlete is around $60k. The majority of their earnings come from prize winnings and personal sponsorships, which can be quite lucrative.

For entertainers, agents mainly help with finding them new deals through sponsorship opportunities and negotiating terms between their client and the brand. By utilizing an agent, they are able to juggle far more sponsorship opportunities and can be more fairly compensated. This is the main reason for entertainers to have agents because their earnings come predominantly from either sponsorships or Twitch subs/donations (no agent needed, except if the streamer tries to re-negotiate their revenue share with the platform).

Sponsors do not shy away from either category. They will typically allocate more of their marketing budget to the entertainer but they still need to have a market share within the professional scene because these are the individuals that hardcore gamers want to emulate. A lot of these hardcore gamers will look at the hardware choices of the elite gamers and buy that same gear (headsets, controllers, keyboards, chairs, etc). This is not dissimilar from how high school and college players look a what shoes Lebron James is wearing. Some startups have even built businesses around curating the best setups in esports based on professional players.

Hardcore gamers are the ones who are going to spend the most money and when it comes to the quality of gaming hardware, they want to know what the best players use, not what the most popular entertainers were paid to promote. This is where you’ll find a slight difference within their shared connection with sponsors. At the end of the day, the professionals need the best equipment possible and this sometimes comes with sponsorship opportunities, yet this is secondary to their performance. On the other hand, the entertainers care more about how much they’re being paid, even if the overall product is not top of the line.

Esports organizations have slowly figured out that a business model specifically predicated on their success in esports competitions is not a viable long-term solution. They obviously have to build a foundation around legitimate teams that compete in top-tier tournaments, but it has proven to not be enough to pay the bills. This is why a lot of entertainers are being signed to organizations as “content creators” which allows these organizations to discover new revenue streams and new fans.

Just in the last couple of months, 100 Thieves has signed Rachel “Valkyrae” Hofsetter and Jack “CouRage” Dunlop who were two of the most popular streamers on Twitch. Neither of them will compete in top-tier esports competitions but they will absolutely help build a more recognizable brand around 100 Thieves (similar to a lifestyle company).

You also have popular streamers like Nick Mercs (just signed with FaZe Clan) and Myth (TSM) who are affiliated with teams but do not compete outside of the typical Fortnite “marketing” competitions.

If you ask any of the 2.6 billion gamers in the world to name their favorite gamers, most of them will likely answer with an entertainer (streamers, personalities), not an esports athlete. This is exclusively related to the marketability of entertainers compared to professional gamers. This is similar to the reason why more people know the supported policies of Jimmy Fallon and Jon Stewart than they know the supported policies of their own congressional representatives.

The entertainers in the gaming ecosystem have essentially monopolized headlines and get their best gaming clips posted across almost every social platform. It’s much tougher to market a professional when they aren’t in front of a camera for 100% of their day (they’re training and practicing for 8–12 hours a day).

The esports athletes are expected to be practicing daily while the entertainers/streamers are expected to entertain. Streamers are continually engaging with their fanbase and with that high-touch engagement comes marketability. The marketability around esports athletes is typically dictated by the affiliated organization (pro-team they play for) instead of the individual players.

The entertainers of gaming must build a following based on their ability to entertain. This requires long hours and packed streaming schedules. Without a brand behind the individual, they must market themselves. To become a successful streamer is not easy because viewers will cast you aside if they don’t believe you’re providing quality content. Even the top streamers lose tons of subscribers when only being gone for short periods of time. The entertainers in the esports space are the epitome of self-made.

To put into perspective how hard it is to be a streamer, there are over 2.2 million people who stream on Twitch. Of that 2.2 million, only 27k (1.23%) are verified “Twitch Partners.” To be a Twitch Partner, you have to stream for 25 hours, stream 12 unique days, and reach 75 average viewers all in the last 30 days to be eligible for Partnership. That may seem doable, yet the 1.23% success rate of that benchmark shows that this is much harder than you might think.

Switching over to the professional teams, there are esports athletes who would likely not be as popular if they hadn’t joined a top-tier esports team. This, as stated earlier, is because they are not purely focused on being entertainers and have to train. They may have a more natural ability to compete than entertain, yet some esports athletes have made the transition to being top-tier streamers after their career as a pro (Shroud is a good example).

Many esports athletes rely on the brand behind the pro-team to get the sponsorship money (via the team or individually), as well as the ability to play in the biggest tournaments that offer prize money.

When it comes to the entertainers/streamers in the gaming space, they make a living by being able to play across a variety of titles. I will use Ninja again as an example because his career started out with Halo, then he began streaming H1Z1 and then made his name by switching over to streaming Fortnite.

He was also paid $1M to stream Apex Legends when it launched in early 2019. The ability to play at a high level across multiple titles gives entertainers much more reach than if they were only good at one title. You never know how long a video game will be popular, so an inability to keep up with new games could be the downfall for a streamer.

Below is a breakdown for another prolific streamer, Shroud, who plays across multiple titles:

In contrast, the professional esports players are paid to focus and master one game. While they may be able to compete at a high level across different titles, it doesn’t benefit them to be playing games that they will not play during competitions.

It has been reported that some professionals will practice for 12–14 hours straight daily to prepare for competitions. This shows how different the professional scene is compared to the streaming scene. Playing multiple titles can overlap with the time that should be spent practicing the game in which you will be competing. Being an esports athlete requires being game-specific.

It’s important to delineate between a gaming entertainer (streamer) and a professional esports athlete. When people refer to esports, that is the competitive scene of gaming and the full-time athletes that compete at the highest level in the world. Given the rise of gaming culture over the past 50 years, the number of prolific gaming entertainers (streamers) has been a career path.

We’re looking forward to seeing the strong growth of both segments over the coming years. As a venture fund, we’re actively watching and observing what tools and platforms these groups are using (Twitch being just one example).