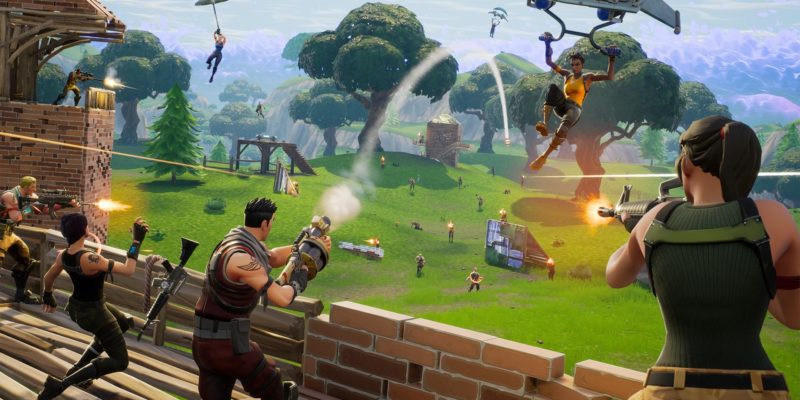 Battle royale games like Fortnite are currently dominating the $135B video game industry, with Fortnite alone looking to double its $1B revenue from 2018 this year.

The term “battle royale” comes from the 2000 Japanese film of the same name wherein a class of students are unwillingly pitted against each other with randomly distributed items and weapons on a remote island. Based on the 1999 manga, Battle Royale predates the similarly themed Hunger Games novels by eight years and the first Hunger Games film by 12 years. However, the Hunger Games played its own role in influencing early battle royale-style games, with fan-made Hunger Games modes (later renamed to Survival Games) becoming a staple of popular Minecraft live streamers and YouTubers throughout the duration of the blockbuster film franchise’s peak popularity. 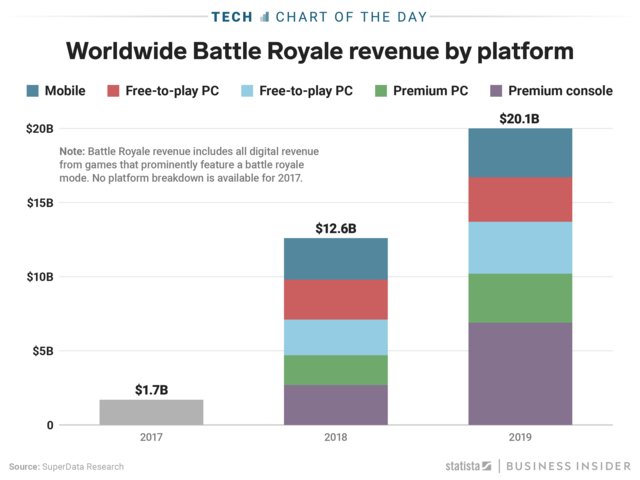 The basis of the battle royale genre is a large-scale “last man standing” type multiplayer in an open world (most commonly an island, which creates natural boundaries). In Minecraft’s Hunger/Survival Games, players start on platforms across from each other, as the character in the Hunger Games films do. In battle royale games, 16-100 players (depending on the game and mode) typically parachute in from the sky, allowing them to choose their “drop zone.” 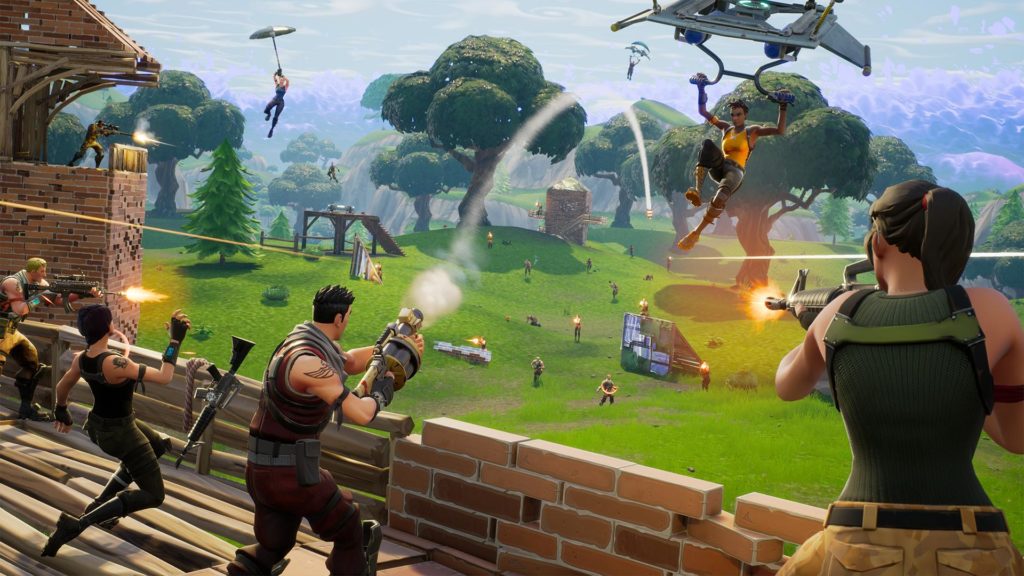 Landing in a popular zone gets players into the action faster, but also means the already scarce randomized weapons and equipment scattered throughout the map will be heavily contested. Landing in more desolate areas allows for more time and relative safety while searching for quality gear, but makes the ever-shrinking “storm” (which deals damage while players are inside it) more of a danger. The storm pushes players towards a final circle, preventing players from simply hiding endlessly. The last player alive is crowned the winner. Many games also feature solo and team options, for players who would like to team up.

In 2013, Brendan Greene, operating under the username PlayerUnknown, created a battle royale mod for military shooter Arma 2 and the insanely popular zombie-themed Arma 2 mod, DayZ. Greene next brought his battle royale formula to the DayZ-inspired H1Z1: King of the Hill, developed by Daybreak Game Company. Finally, he joined South Korean developer Bluehole, Inc. as creative director of the first major battle royale-focused standalone game, PlayerUnknown’s Battlegrounds (PUBG), which was released on Steam Early Access to record-breaking success in March 2017. Despite a slew of ongoing technical issues, PUBG collected an estimated $712M in revenue by the end of 2017.

The unparalleled success of PUBG prompted a number of other developers to add battle royale-style modes to their existing games. Most notably, Epic Games (creators of the Unreal Engine, which Bluehole licensed for PUBG) spent three months creating a battle royale mode for its long-in-development title, Fortnite. Released in September 2017 as a free-to-play counterpart to the original cooperative game–now retitled Fortnite: Save the World — Fortnite Battle Royale (commonly shortened to simply “Fortnite”) quickly dominated the gaming scene with a reported 20 million unique players by November 2017.

By January 2018, Fortnite had amassed a player base of over 45 million users, and its revenue for the year would exceed PUBG’s by a large margin. Fortnite was not only a successful game, but a cultural phenomenon, with many of its featured dances and emotes (themselves taken from pop culture) being seen in school halls, films, and news reports around the world.

Like with past popular genres such as MOBA (League of Legends) and MMORPG (World of Warcraft), the success of Fortnite and PUBG triggered a swath of wannabe contenders vying for the latest gaming golden goose. Some added value to an existing platform, such as Rockstar Games’ Grand Theft Auto Online and Valve’s Dota 2 and Counter-Strike: Global Offensive; Call of Duty’s 2018 entry, Black Ops 4, completely eschewed the franchise’s signature big budget single-player campaigns to focus on a new battle royale multiplayer mode, while longtime competitor Battlefield V added a battle royale mode post-launch to mixed results.

Boss Key Productions, led by former Epic Games frontman Cliff Blezinkski (Gears of War), was reeling from the failed launch of its first game, the hero shooter LawBreakers. Within a week of announcing the closure of Lawbreakers, Boss Key revealed and launched Radical Heights, an ’80s-themed Fortnite imitator, which the developer described as being “X-treme early access.” Radical Heights lost 80% of its initial playerbase within two weeks, and was shuttered along with the studio shortly thereafter in May, 2018.

Respawn Entertainment’s titan-less Titanfall spin-off, Apex Legends, announced and released on February 4, 2019, saw 25M unique players in its first week thanks largely to a massive swath of paid influencers (with some reports putting streamers like Fortnite and live streaming superstar Ninja at a $1M contract to promote the game). Apex Legends brought in $92M in revenue its first month and boosted publisher Electronic Arts’ struggling stock value. But after the initial momentum wore off, Apex Legends failed to provide the rapid cadence of updates and fresh content that Fortnite had standardized, and soon hemorrhaged a sizable portion of its player base, with revenue dropping 74% by April.

Likewise, Paladins spin-off Realm Royale saw an initial burst of popularity due to paid influencers (including Ninja) and a unique fantasy-driven theme, but quickly lost 72% of its active players within weeks of its launch. Realm Royale saw a peak of 104K players during its launch window in June 2018 (compared to PUBG’s 1.75M), and currently sees an ever-declining average of approximately 2,000 players (as of July 2019). 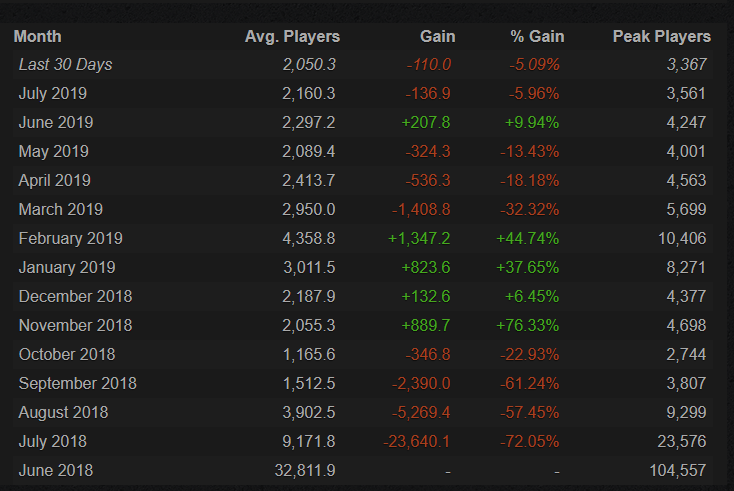 While battle royale has thrived on PC and consoles, the numbers for the genre’s top performers on mobile are even more staggering. Chinese publisher NetEase’s iOS and Android mobile battle royale game Knives Out grossed $465M in 2018, edging out Fortnite’s impressive mobile purse by $10M. 80% of Knives Out revenue originated from Japan, while less than 1% was due to U.S. players. Data for 2019 is tracking these titles at an upward trajectory, with PUBG Mobile and Garena Free Fire also looking at roughly half a billion and a quarter billion dollars in revenue, respectively.

Battle royale games have made a profound impact on the eSports professional gaming scene, as they tend to be an excellent spectator experience. Epic Games allotted a staggering $100M to its Fortnite competitive prize pool, culminating in the July 2019 Fortnite World Cup, with a minimum payout of $50,000 for all finalists and a $3M grand prize, awarded to 16-year-old Kyle “Bugha” Giersdorf.

The unique concept and inherent replayability of battle royale games has drawn in everyone from big name celebrities and politicians to filmmakers like the Russo Brothers, directors of Marvel’s Avengers Infinity War and Endgame, the latter of which is not only the highest-grossing film of all time, but features a scene specifically about Fortnite. Fortnite returned the favor with multiple official crossover events in-game.

Battle royale is currently the hottest genre in the video game industry, and the astonishing player count for games like Fortnite ensures continued dominance for the foreseeable future. Apex Legends proved that excellent game design and brute marketing force can push new titles to the forefront, but whether any title can compete with the staying power of juggernauts like Fortnite and Knives Out remains to be seen.