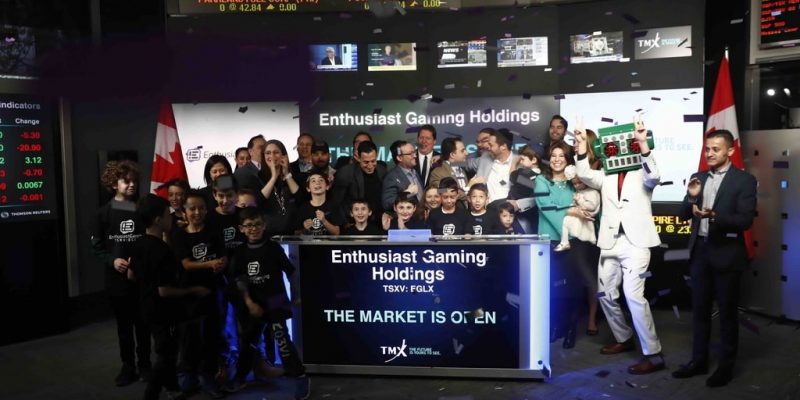 Forbes reported this morning that Enthusiast Gaming (currently listed on OTC [ENGMF] but already working on a NASDAQ uplist) acquired the largest esports/gaming company behind Pokimane, Sidemen, and 900 others, adding on close to $80 million of revenue for the combined company.

Christina Settimi from Forbes stated: “The purchase gives Enthusiast access to 90 million gamers, boosting its reach to a total of 300 million gamers monthly and making it the largest gaming media platform in North America, according to measurement firm Comscore.”

With its new acquisition of LA-based juggernaut “Omnia”, Enthusiast Gaming has the potential to be the most valuable Esports Media Stock in North America (and its best kept secret)

One thing is certain, Enthusiast Gaming [OTC:ENGMF] is the best kept secret in the world of Communications Media and the burgeoning world of esports stocks. According to our research at Gaming Street, Enthusiast Gaming [OTC:ENGMF] was already the biggest gaming media network in North America and the English speaking world prior to this acquisition. In fact, Comscore listed it as even larger than Twitch in the US. It has the largest combined web and video audience in the gaming space.  Adding Omnia to that base now makes them one of the largest gaming media companies in the world and a company that has incredible potential product offerings to those 300M gamer reach.

The acquisition of Omnia on sheer numbers and suitability to the business model is a great fit. Some shareholders may say that the even better piece of news is what it says about Enthusiast Gaming’s ability to execute; its management and their approach to growth. Enthusiast Gaming [OTC:ENGMF] may just have all the ingredients to grow into an enterprise with a much more prominent profile for investors. A significant strategic move is in store for Enthusiast Gaming now that it has built a sustainable foundation with fast-growing revenue and Users.  As Adrian Montgomery, CEO recently said in the acquisition, ““Gaming is the new social network, and we’re building it.”

The devastation to many companies during the coronavirus pandemic may have initially affected Enthusiast Gaming’s stock price, however the company reported that it actually saw major increases in engagement and paid subscribers due to the increase in stay-at-home gamers.

Growth has been truly impressive over the last 5 years.  EG has more than doubled revenue each year since 2016. Revenue and user growth has always been a top priority and they have achieved YOY growth on both fronts considering the company is just over 5 years old.

The growth pattern has been impressive. During its first year of serious operations in 2016, the company’s ad revenue was only C$350,000. In its second year, that grew 10x to C$3.5 million. It’s continued that momentum. In 2018, their total revenue grew 3x from the previous year to $11 million. The company made more than half of that amount in just Q3 2019 alone, with $6.3 million and more than doubled their previous year with 2019 Pro Forma revenue of $23.2 million. According to Cannacord’s analyst report by Robert Young, their FY2020 projection was a conservative $35 Million.  Adding the $80M 2019 Omnia revenue to the company should translate into more than $100M 2020 Pro Forma Revenue.

The hockey stick growth chart of their users and revenue looks very real.

Enthusiast Gaming [OTC:ENGMF] has proven that by catering to Esports and gaming fanatics it can grow both organically and through acquisitions.  All of this leads into the social network they are building. At the core of gamers’ hearts is the affinity to share, discover, and connect within their communities and passions on different platforms and mediums.  Gamers can congregate around a platform (Xbox, Nintendo), genre (battle Royale, FPS – first person shooter) or even around a gaming influencer that they admire.

It is these unique and diverse communities across many different platforms that Enthusiast Gaming [OTC:ENGMF] has amassed, engineered, and monetized.  Enthusiast Gaming [OTC:ENGMF] has a unique ability to organize all these communities across their websites, socials, live streaming platforms and figure out how to cross promote, increase engagement and monetize.  The Omnia deal is as much about adding 500 new unique communities of fans, gamers and content and what they will be able to do with that across their platform as it is about adding all that revenue.

Omnia has 2.5 times the revenue of Enthusiast Gaming [OTC:ENGMF], that says a lot right there about acquisition mojo. There are generally two kinds of growth, organic, and growth by acquisition. How the execution of both is accomplished can be variable as to quality. The ideal growth formula is a combination of a knowledgeable operator that can execute and grow organically, but also is able to opportunistically acquire good properties.

Enthusiast Gaming [OTC:ENGMF] branched out into esports with the merger of Luminosity Gaming last year making it one of the only public companies to own esports teams.   Luminosity brought access to the wild growth of esports. The esports market,  surpassed $1 billion this year and has grown its audience to more than 450 million worldwide. Luminosity Gaming itself reaches 70 Million fans, and 50+ esports influencers and that feeds into the media/entertainment/events flywheel that Enthusiast Gaming has created.

Seeds have been planted with Luminosity Gaming and the synergies with all the other properties will bear fruit for years to come. Luminosity has already grown grown since the acquisition from 60 to 70 Million,  added numerous brand deals, acquired 2 new teams for Fortnite and Apex Legends, and created cost efficiencies. The new Spidertech athletic tape brand deal is an indication of how utilizing their multi-faceted gaming and esports properties will continue to attract brands and allow them to profit of these new acquisitions and gaming properties.

Why is the comparison to these names in the  social networking space? On July 21st Founder and President Menashe Kestenbaum tweeted:

Deep in the R&D bunkers of EG we’ve been hard at work on a secret project that I think will evolve the gaming world. It’s a social network app for the 200m+ gamers that visit our sites monthly. We’re coming closer to a private alpha launch for invited guests. Stay tuned!

I believe that Enthusiast Gaming [OTC:ENGMF] has a big enough foundation to build a gaming social network. A network that has real functionality that a gamer would want to join. Finding a new worthy opponent in Fortnite across the country. Discovering someone at your skill level in Red-Dead Redemption that also plays League of Legends. Amateur leagues, contests, prizes. There are all sorts of social activities that a gaming network can support, and in the words of Founder Menashe Kestenbaum ‘”Evolve the gaming world”.

Many of the pieces are already there– there is already interactivity between users on the 100+ communities of Enthusiast Gaming [OTC:ENGMF]. They already have over 100k paying subscribers on their network.  Enthusiast Gaming [OTC:ENGMF] will have 300 million MAU and that is big enough to power a critical mass of social network members. Just one percent of the Monthly Active Users signing up per quarter gets you to 12 Million in 12 months. 12 Million users in 18 months would be a smash, even 10 Million would be a fantastic start. At that point the growth can get geometric as one user pulls in at least one other user. What is the value in that? Take the market cap of Snap divide it by the DAU then multiply it by 10 Million, what do you get? Once there is a central nexus for social interactivity that would also be the place to put special content, eSports streaming, video, leaderboards for the best amateurs, all sorts of functionality.

Don’t expect this all at once. I suspect that Enthusiast Gaming [OTC:ENGMF] will want to start slow. Just remember Netflix started by using the US Post Office to mail out DVDs. The rest is history…