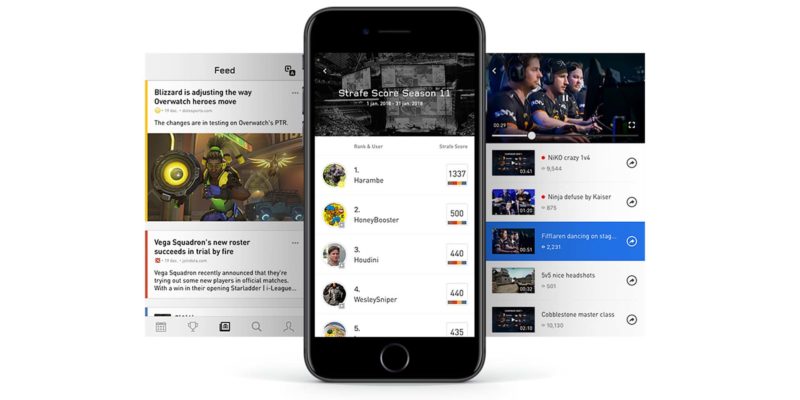 Esports company Strafe announced that it raised $3 million to further develop its esports companion app and betting game. The funding comes from Bitkraft Esports Ventures, which has been very active in investing in the esports market.

The Strafe app acts as a data hub, allowing fans to stay up to date with their favorite games, teams, and competitions with real-time scores, statistics, and news. There is also a social betting component that’s tied to deep statistics throughout matches. Users can earn points and compete for leaderboard placement by voting for winners for esports matches.

According to Strafe, the funding will be used to focus on additional user acquisition and further product development. It intends to enhance the app’s features and scale the platforms so that more esports can be reached.

Strafe current covers eight games, including League of Legends, Counter-Strike: Global Offensive (CS:GO), and Dota 2. The app features a database with live coverage of 58,000 matches, 12,000 professional players, 2,600 teams across 150 countries. The app aggregates and curates that data according to the user’s customizations. The data is also used to power the odds-system in the social betting game.

“We are extremely excited to welcome Bitkraft Esports Ventures as an investor in Strafe,” said Strafe CEO and co-founder Einar Ahlström in a statement. “Bitkraft is the leading esports VC in the world and they bring much more than just capital to the table. They are deeply connected with all main entities within the esports community and will help propel our business as we execute on our game plan going forward.”

Bitkraft Esports Ventures has invested in numerous esports startups since its founding in 2017. They include brands such as H4X.gg apparel, the internet tech company Network Next, and Japanese esports events organizer PlayBrain.

The original Bitkraft Esports Ventures venture capital fund raised $18.5 million. In January, the company filed with the United States Securities and Exchange Commission (SEC) to start a second fund that could raise up to $125 million.

Additionally, Bitkraft partnered with Roundhill Investments in June to launch the Roundhill Bitkraft Esports & Digital Entertainment ETF (NERD), which targets the esports space. The fund covers video game developers, platforms, event operators, and more. Although the NERD fund and others like it are relatively new, more investors are turning to index funds to better navigate video game investments as esports continues to grow at a fast pace.