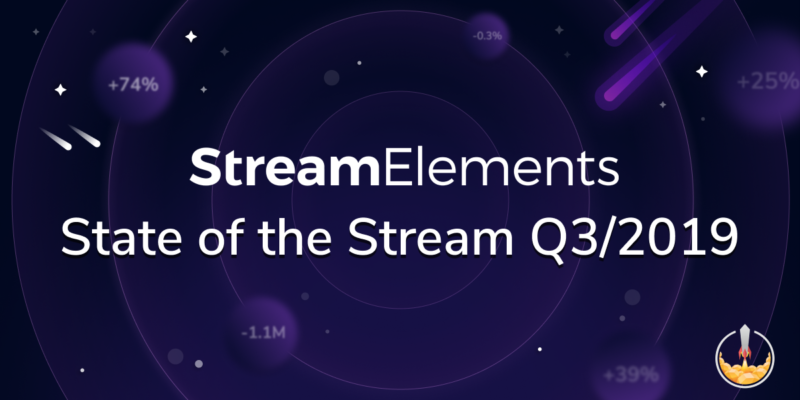 Note: This article first appeared on the StreamElements blog. The State of the Stream Q3 2019 report is authored by Adam Yosilewitz and Chase.

Can we have a drum roll please, or get Mrgregles in here with his amazing beats? Why? Because it’s time to unveil the StreamElements Q3 2019 State of the Stream report, full of data and insights about your favorite streamers and the platforms they use.

Covering July to September 2019, our report reveals just how big (or small, no spoilers) the effect Ninja’s move to Mixer had, how many people other than shroud are playing World of Warcraft, and what games you are enjoying on Twitch (fan fact: it’s not just games).

We compiled the report together with data provided by our friends at Arsenal.gg and SullyGnome.

How Did Ninja Impact Mixer’s Growth? 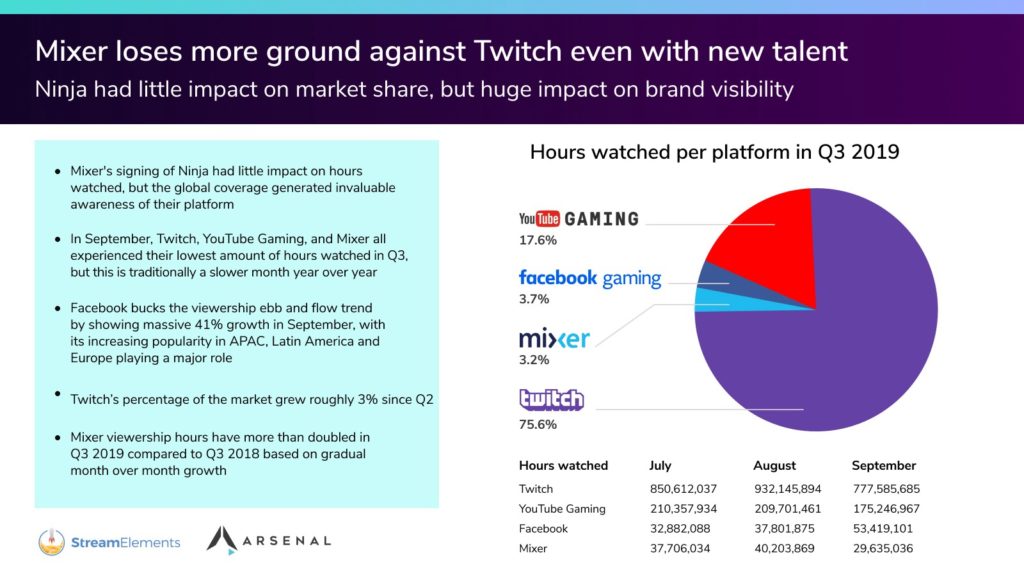 One of the biggest streaming stories in Q3 2019 was Ninja’s announcement that he would be moving to Mixer. Ninja moved to Mixer from Twitch in August, but so far that move hasn’t had a huge impact on Mixer’s viewership hours. However, the move received a massive amount of media coverage and thrust Mixer into the spotlight as a major Twitch competitor. This might be just as valuable to the brand as any incremental hours watched.

Mixer now has 3.2% of the live streaming market which is growth of 0.2% compared to Q2 2019. The Mixer viewership hours have also more than doubled in Q3 2019 compared to Q3 2018, but this has been gradual month over month growth rather than the result of signing Ninja. 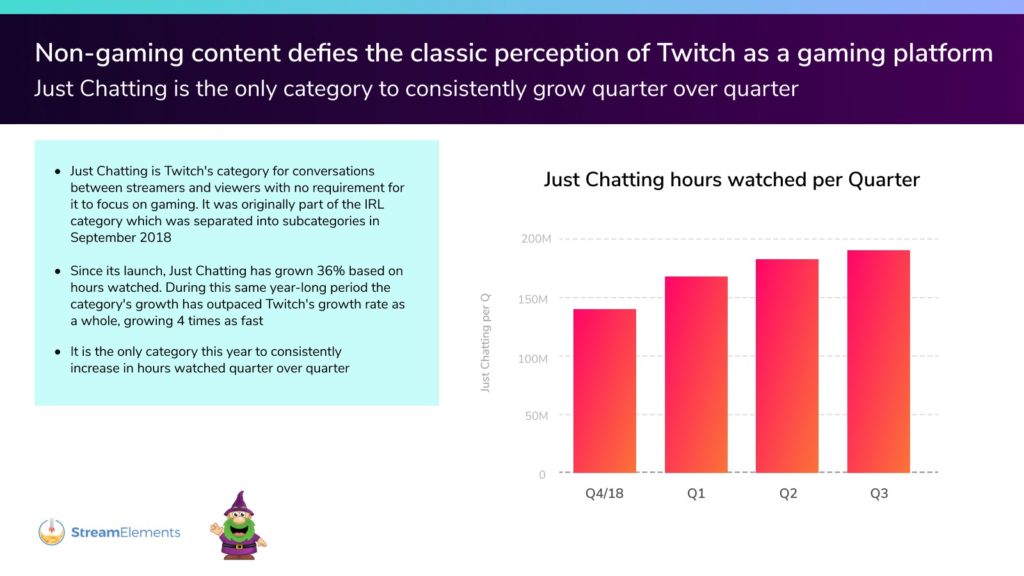 Just Chatting should change its name to Just Growing after the category for chat shows and conversations has increased 36% in viewership hours since Q4 2018.

Twitch is famous for its gaming livestreams but Just Chatting is the only category to keep growing like this each quarter.

While Twitch has been delving into non-gaming content for years, the momentum of this category shows that it could rival gaming content in the years to come.

What are the Most Popular Games on Twitch? 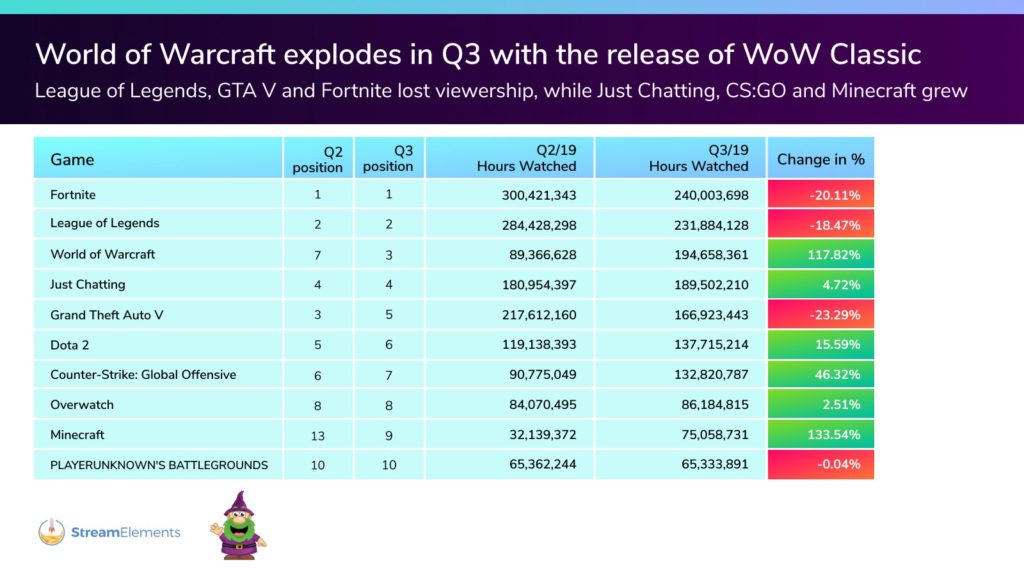 The top 10 most popular games on Twitch saw major movement in Q3 2019.

Fortnite and League of Legends are the first and second most popular games, but their viewership hours dropped by more than 15%. Grand Theft Auto V also saw a huge 23% drop. 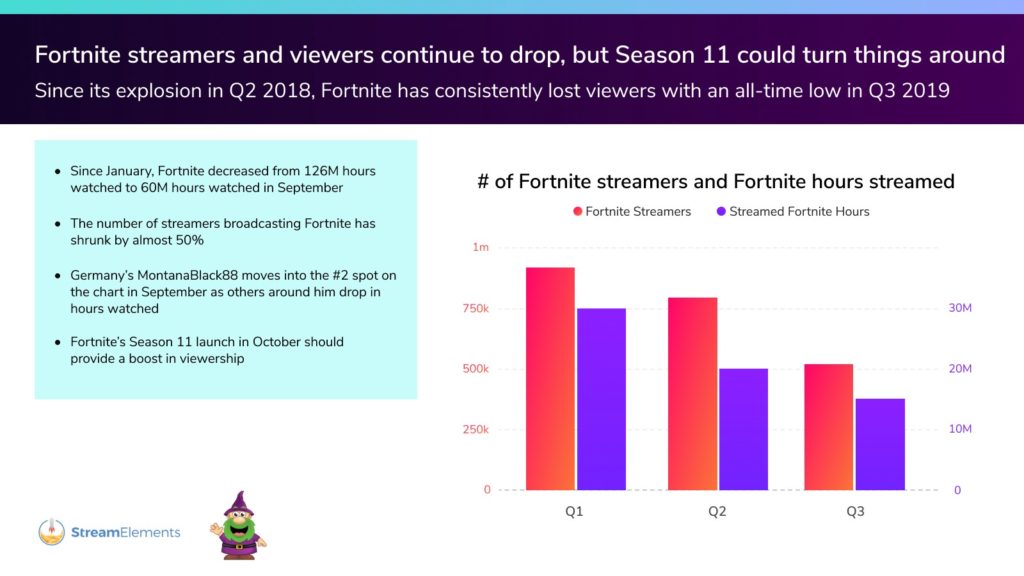 There is no question that Fortnite is still the game to beat when it comes to popularity even as both its viewership and the amount of people streaming it continue to decline. Now at its lowest point since launch, Season 11 is hitting at just the right time to give it a new boost. 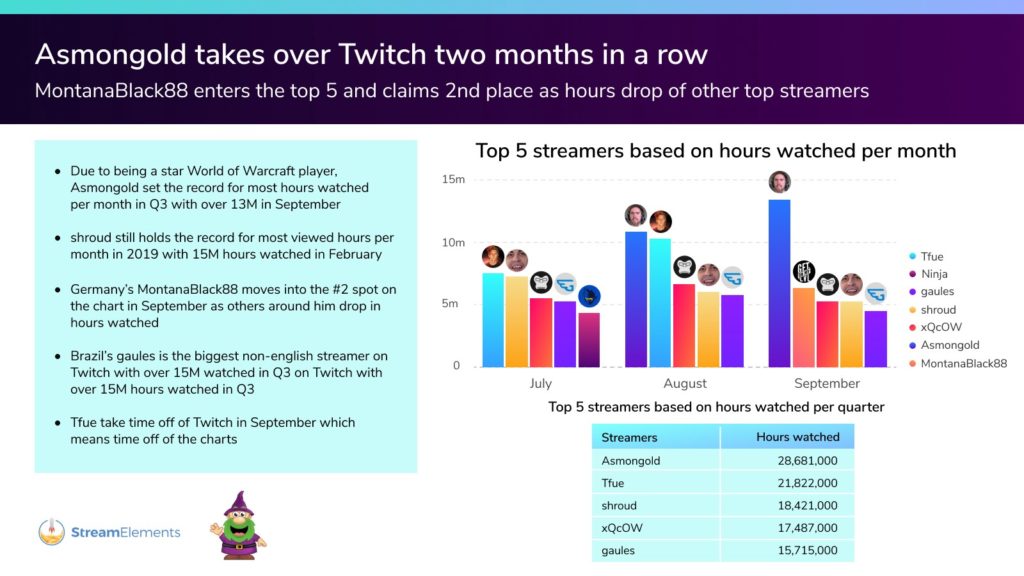 Ninja’s move to Mixer in August and Tfue’s break in September meant that there was some movement in the top five streamers on Twitch in Q3 2019. The Fortnite streamer with the multi-colored hair had been in fifth place in July.