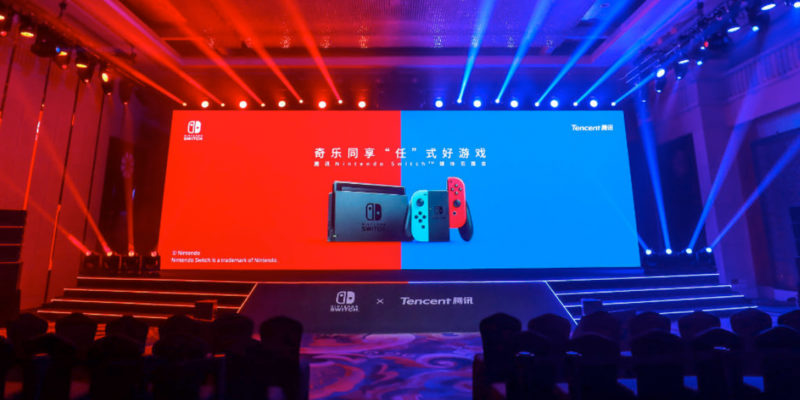 Nintendo (TYO: 7974) and Tencent (HKG: 0700) have revealed details about their partnership to bring the Switch to China.

In order to make the system more appealing to Chinese consumers, and more viable in the mobile- and PC-preferring Chinese market, Tencent will help Nintendo implement several changes to its system. The Chinese company will provide cloud computing services and servers to support Nintendo Online, a subscription service equivalent to Sony’s PlayStation Plus and Microsoft’s Xbox Live. Additionally, Tencent will help translate several best-selling Switch games, including Super Mario Odyssey and The Legend of Zelda: Breath of the Wild, into Simplified Chinese. The Switch’s online store will also be modified for the Chinese market to utilize Tencent’s popular WeChat Pay system, a money transferring app similar to PayPal.

When the Switch will be released in China and how much it will retail for were not revealed at the press conference. Microsoft’s (NASDSQ: MSFT) Xbox One was released in China at a retail cost of 3,699 yuan ($568 USD), while Sony’s (TYO: 6758) PlayStation 4 costs 2,899 yuan ($468 USD). In North America, the Switch has historically retailed for about $100 lower than the PlayStation 4, so a decent estimate of its eventual Chinese launch price would be about 2,554 yuan ($368 USD).

Nintendo’s advantages and disadvantages in the Chinese market

Consoles were banned in China until 2015. Despite its enticing size, China has been a difficult market to penetrate for console developers.

One reason for consoles’ failure to flourish in China has been strict government regulation of software. In 2015, the Chinese government approved only 54 PlayStation 4 titles for sale, compared to the over 1,000 that were available worldwide. Regulations also require games to be modified or censored to “make sure they accord with socialist core values, Chinese traditional culture and moral rules.” It is unclear at this time how or if titles like Super Mario Odyssey and Breath of the Wild will be altered to meet these standards. Games found to be in defiance of these standards have faced harsh penalties. Companies have had their business licenses revoked over games with content critical of Chinese President Xi Jinping.

The Switch could be in a better position to succeed than the Xbox One or PlayStation 4, however. During the years when consoles were banned in China, mobile devices became the preferred platform for gaming in the country. The Switch, which can be played either through a television or as a handheld device, is well-suited to succeed among consumers who value convenience and portability. The upcoming Switch Lite, a variation of the console that will be entirely handheld, could also help Nintendo succeed where Sony and Microsoft have so far struggled.