First, and foremost… Happy Thanksgiving to all you fellow Canadians!

Now then, some news from a few of our friends in the world of gaming:

Gaming on the cover of SI 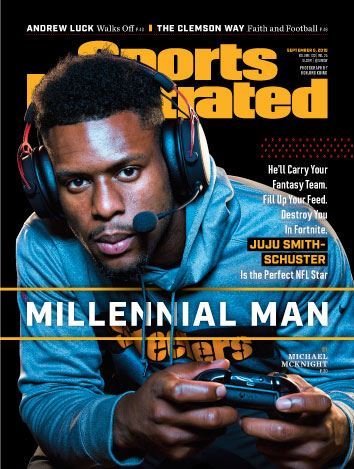 Let’s talk about the news of the week: Our own special version of 1984

It was a big week for mobile games 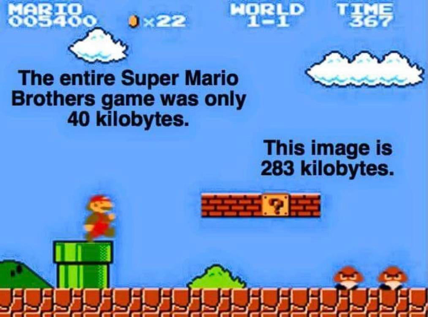 Weekly Feature: Nothing Else Matters

Open mind for a different view
No, nothing else matters
– Nothing Else Matters, Metallica

It’s Thanksgiving weekend in Canada, everyone, and in the spirit of a long weekend, we thought we’d flash a few charts that we think are meaningful for some deep weekend thinking. The topic of conversation below is gaming and is underpinned by quantitative data. Before we dive into that, an important piece that is worth mentioning is esports. A lot gets said about esports as a content vertical (this year US$1B – $2B in size depending on who you talk to). In comparison to gaming, that market is minuscule. That’s missing the point, though.

Esports is doing something vastly more important for gaming. For the first time, potential investors can go to an event and see tens of thousands of screaming fans at a professional gaming match. Esports has made gaming tangible. We are just beginning to see this trickle through the investor universe of gaming, and I personally have seen this have an effect on investors of all types.

With that said, let’s dive into the numbers…

In terms of annual revenues, gaming this year will outpace the music and movie business combined. It’s interesting, given that the media seems so dead focused on the ‘streaming wars’ between music and movies when neither content silo comes close to the size and scale of the game content vertical. The way I see it, the movie/music streaming wars are a nice preamble for the real war that is just starting for distribution of the most valuable content vertical in the world.

Chart: Game total market in 2019 in billions of US dollars

This year, the entire gaming market will expand by 9%. It is the fastest-growing area in content, and at this rate will outpace both Pay TV and TV advertising in 2 years. This isn’t pie in the sky hope. This is simply more people around the globe having internet and having smartphones to play games. It’s esports stars making gaming look cool. By the way, in Canada, there are <10 publicly-traded gaming companies.

Gaming is the second cheapest form of entertainment

Why does this matter? It matters for two reasons. First, it makes gaming accessible for everyone globally to enjoy. Virtually the entire planet can afford to play games. Secondly, and perhaps most pertinently, is the gravitation to gaming in a recession environment. There isn’t a day that goes by that there isn’t talk about a coming recession. Whether or not it happens is not my call. What we can discern, though, is that elastic spend on the most expensive content forms in a recession environment contracts, while time spent on inexpensive content forms remains consistent or increases.

Chart: Cost per hour in US dollars for each content form

In ’08 and ’09 the game market actually increased in size while the rest of the world went into a negative tailspin of GDP growth. Yes, the growth rate in gaming dropped precipitously from +20% the years prior, but it still was growing at ~5% in the worst economic conditions arguably since 1929. This year we will grow the entire gaming business by 9%, from US$122B last year. That’s a US$17B increase in global revenues to the space and is an impressive growth rate for this large an industry. 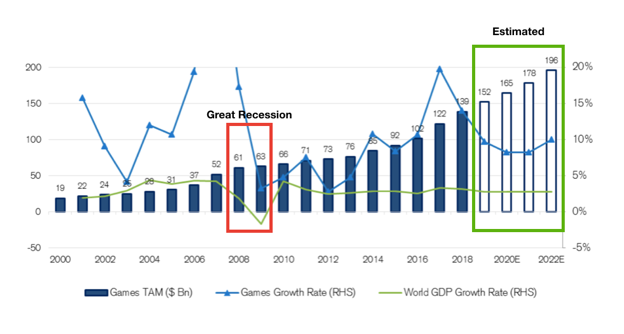 Gaming has a makeover, and that makeover is free-to-play

In 2008 and 2009, the free-to-play revolution was just beginning, and it was being led by Asia and the smartphone revolution. Asia, particularly Korea, was the first to truly begin to understand and hone the free-to-play business model with Maple Story. Today, China, Korea, and Japan show exactly where the rest of the world is going for gaming. Free-to-play will only continue to increase. Subscription services like Apple Arcade are +decade strategies in an attempt to wrap control around the gaming industry. They’re looking at the same charts we do and understand there are ways for game developers to bypass the App Store 30% ‘tax’.

Chart: Implied spend by country on free-to-play games (US$ per person)

In December they brought on Keyvan Peymani as their Executive Chairman (the former head of startup marketing for Amazon Web Services and a former VP at Warner Bros and Disney) as they began to scale their platform to new games. They allow players to win real-life rewards while playing in-game, and can be integrated into any Unity-based game.