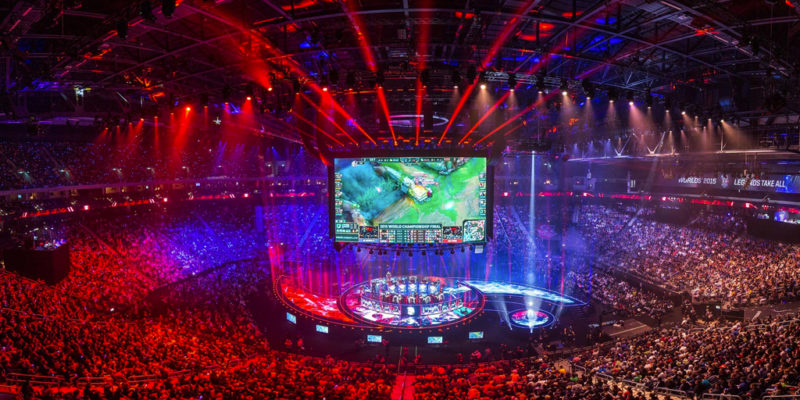 Gaming ostensibly used to be something only “nerds” did. Now everyone — well, almost — plays video games. From console gaming to PCs, handhelds, and especially mobile phones. You’d be hard-pressed to find a person who hasn’t at least played computer Solitaire, or Angry Birds, or whatever other addictive games people are playing on their phones these days. But at some point along the line, someone decided to take these “fun” pastimes and turn them into competitions. Thus esports was born. But where did it all start? Let’s take a look at an awesome infographic designed by NJ Games and unpack some of the things we discussed almost two years ago in our first “Rise of Esports.”

The history and numbers of esports

According to NJ Games, who has done some recent studies on esports, competitive video gaming started with Space Invaders. The game was released in the late 1970s. Just two years after its release, Atari organized a tournament. Fast forward to today and tournaments are being played all over the world. Some carry massive prize pools, in the millions of dollars. Like in the physical world of sports, people were entertained by watching others play sports, and this drove viewership.

You might remember we spoke to Simon Alty from Bethesda at PAX Australia last year. He spoke about something similar. Alty said we’ve gone from thinking that watching people play games is boring to making appointments to see people play games:

‘The most boring thing in the world is watching someone else play a video game.’ That’s what we used to say. And now today, more people are watching than playing… In 20 years, we’ve gone from ‘it’s boring to watch video games’ to people tuning in, making appointments to see someone playing a game. It’s so exciting.

Like Alty says, people are buying tickets to watch games. They are setting aside time to watch their favorite streamers. And the numbers don’t lie. Esports is more and more a spectator sport. According to NJ Games, there were only 124 million esports viewers in 2012. Four years later, the numbers tripled. An overwhelming 335 million people watched esports in 2017. Some sources say the numbers will reach 557 million by 2021.

Many people believe only gamers watch esports. But research suggests this is untrue. According to NJ Games, 40 percent of spectators haven’t played the games they are watching. Thus, we must assume esports is a spectator sport. The numbers of streamers and streaming services are increasing too. YouTube started it, but Twitch (now owned by Amazon) is growing at a rapid rate. In fact, Twitch accounts for 1.8 percent of total internet traffic and 43 percent of all live video streaming traffic; it now outweighs YouTube in live video streaming.

As the numbers of viewers increase, so too does the revenue. It’s clear to see from the increase in prize money to the rise of non-endemic brands being involved that esports must be a profitable business. But what does the money show? Well, in 2012, revenue in the industry was 130 million USD. Fast forward to 2017, and it was 468 million USD. That has almost quadrupled in four years! It almost doubled again in 2018, when the numbers hit 906 million USD. Any industry that is growing at that rate is worth being involved in.

Where else is the money?

There are lots of money in esports. It’s just split across a number of sectors. Teams and organizations receive some of their earnings from advertising, media, and merchandising. However, most of their earnings still come from sponsorship. There’s also plenty of revenue from game publishers, events, and streaming. More recently, larger chunks of cash are coming through wagering. Whilst traditional sports are the most popular realm of sports betting, esports is growing. More and more companies are offering bets on esports, and this is expected to grow considerably as viewership increases.

You’ve probably already guessed, but lots of money is pouring in from non-endemic brands. As it becomes more popular, it is more justifiable and logical to invest in esports. Sporting leagues have started investing in teams, such as FIFA, the NBA, and the Australian Football League. Many of these sports also have their own video games such as the NBA 2K series, Madden, and even the Formula 1 games. Sporting leagues are becoming involved not just in their own games and tournaments, but outside too.

All this seems very rosy. But there’s always another side to every “good” story. Although there are lots of money in esports, and plenty of interest, there’s also lots of opposition. Lots of parents and mainstream media still play the “video games are violent” card. Others see issues with the inclusion of esports in traditional sporting competitions such as the Olympics. Regardless, there are clear links between traditional sports and video games.

Along with some of the mind-blowing stats above, NJ Games has painted a colorful and informative picture of our esports landscape. We think the work is fantastic and enlightening so we’ve decided to include the entire infographic below. Check it out, share it around, and maybe we’ll come back here in two years’ time to see how this industry has changed again.

This article originally appeared on our sister publication, Daily Esports.