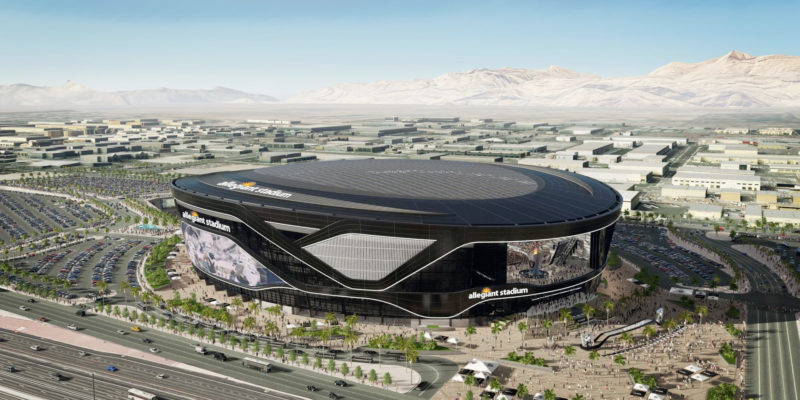 The partnership will see a Twitch-branded lounge with “interactive elements” installed in Allegiant Stadium, which is currently under construction in Paradise, Nevada.

The Twitch Lounge will feature streaming stations as well as broadcasts of live Twitch streams and esports events. Twitch intends to host its own events at Allegiant Stadium, which will seat 65,000 people when it is complete.

Regarding the partnership, Twitch COO Sara Clemens said in a press release:

At Twitch, we are constantly looking for new ways to engage with our community online and IRL. Being a founding partner at Allegiant Stadium is a perfect opportunity for Twitch to converge our passionate gaming and live esports community with the world of traditional sports. As part of our long-term vision for multiplayer entertainment, we are excited to elevate the spectator experience at live events in the heart of the entertainment capital of the world.

We’re thrilled to announce our partnership with Twitch as the Official Streaming Platform of the Raiders and Allegiant Stadium. The Twitch Lounge will elevate the spectator experience for Raiders fans in a brand new way — bridging the connection between fans in the stadium and at home unlike ever before.

Electronic Arts committed to Madden NFL as an esport

Electronic Arts (NASDAQ: EA) announced during its Q1 earnings report in July that it was committed to supporting the burgeoning esports scene for its annual sports titles FIFA and Madden NFL.

Last month, EA announced the Madden NFL 20 Championship Series. The new esports event cycle is designed to tie in more closely with the NFL’s own schedule. The series’ first event, the Madden NFL 20 Classic ran from August 30 to September 1, leading in to the beginning of the NFL’s regular season this week.

Twitch partnering with the Raiders will be exciting news for EA. The company’s stock has risen and fallen based on politicking in the sports world before. Allegiant Stadium is scheduled to open in August, right around the time EA typically releases the latest Madden NFL title. If the NFL 20 Championship Series is a success for the company, it’s easy to imagine an NFL 21 Championship Series that takes full advantage of an esports-integrated NFL stadium.